On January 4, 1561, Prince Vasyl Kostiantyn Ostrozkyi purchased from Vasyl Labunskyi a third part of Kolyshchentsi village, receiving royal privileges for the founding of the city and the Magdeburg rights for it. Named as Konstiantyniv after his father Kostiantyn Ostrozkyi.

Konstiantyniv residence of princes Ostrozkyi was first mentioned in sources in the mid-1570s in connection with the visit of the castle by the contractor of construction works. Over the next twenty years, the Kyiv Voivode visited the residence at least fifteen times. 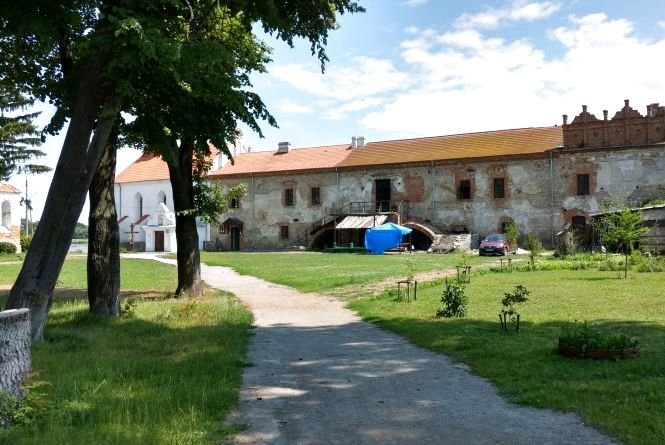 Severyn Nalyvaiko served as the centurion of the outskirts of Konstantinovsky Castle’s Cossack Hundred in 1591.  As at 1610, the castle consisted of twelve buildings. According to the inventory, since 1621 the castle had been substantially armed. The Tatars were never able to conquer it. Another inventory of 1636 indicates that a well-developed castle infrastructure was already in need of repair. By the time the castle grounds had a powerful entrance gate, a large wooden house with a hall, which had fifteen windows, and a stone arsenal.

In 1648, the castle was stormed by the rebels of Khmelnytskyi. Two houses remained in the city after the storm.

At the end of the 17th century, the castle was reconstructed. After the death of Kostiantyn’s Ostrozkyi granddaughter Anna Khodkevich, the castle by inheritance on the female line passed to the Sanguszko princes. Since then, none of the owners did not in it. Among the improvements made at that time, one should mention the addition of the narthex to the church. The castle was rented by various people and used mainly for household purposes.