The princes of Ostroh considered themselves the descendants of St. Prince Volodymyr. Thereby, they paid close attention to the capital city of the Rurikids – Kyiv. The Ostroh princes had two ancestral tombs, namely the Epiphany Cathedral in Ostroh and the Church of the Assumption of the Kyiv-Pechersk Lavra. Most of the princes of the Rurik dynasty were buried in Kyiv, so the princes of Ostroh pursued the involvement to the capital city circles. Therefore, Prince Fedir Ostrozkyi, after his military exploits, got tonsured as a monk of the Kyiv-Pechersk Lavra and died there eventually. Later, the ashes of St. Theodosius, the Prince of Ostroh, were canonized by Peter Mogila. Though, this took place only in the 17th century.

The princes had ambitions of the mighty principality for life and, therefore, Prince Illia Ostrozkyi buried his father Kostiantyn Ivanovych Ostrozkyi (who was the Grand Hetman of Lithuania) at the Church of the Assumption of the Kyiv-Pechersk Monastery. After, his brother Prince Vasyl-Kostiantyn built an opulent tombstone of red “Hungarian” marble over his father's grave in 1579. This tombstone served not only as a decoration of the tomb but also as an ambitious project. Such tombstones were placed on the tombs of kings. Hence, the prince-royal crown appears on the head of the Prince oh Ostroh. In the meantime, Vasyl-Kostiantyn claimed the Crown of the Kingdom of Poland and the Grand Duchy of Lithuania.

Prince Vasyl-Kostiantyn was the voivode of Kyiv, accordingly, he was often necessitated to stay in Kyiv for voivodship affairs. However, since the wooden castle was a bad shelter, Vasyl-Kostiantyn lived at his own estate. Another reason the prince did not want to spend his own money to strengthen the fortress was that in the 16th century, it was already the property of the king, although the castle once belonged to the prince's ancestors of the Rurik family.

The prince consistently and faithfully took care of church shrines. This is applicable primarily to the Pechersk Monastery and the Church of the Assumption, which the Prince of Ostroh rebuilt at his own expense.

After graduating from the Ostroh Academy, many of its graduates became metropolitans and abbots of Kyiv monasteries. They became the intellectual elite that developed Kyiv in the 17th century. They were the cornerstone of the Brotherhood School foundation, which became the Kyiv-Mohyla Academy subsequently. 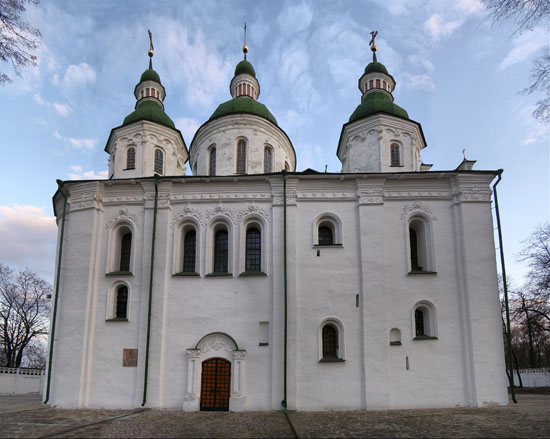